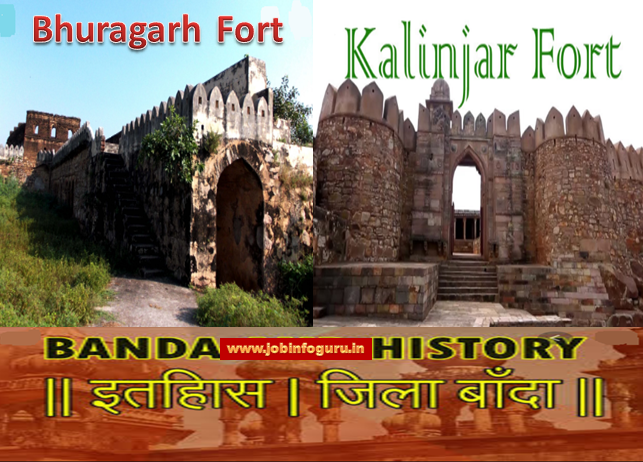 Banda History / Pride of Banda: India boasts of its glorious history with its diversity, historically the past of Banda district has been very glorious. Banda has its own special place in archaeological, historical, cultural, geographical and industrial point of view. The ancient heritage of Hindu Muslim communal harmony, spiritual, Vedic, mythological, education, culture, music, art, beautiful buildings, religious, temples, mosques, historical forts, glorious cultural arts, from time immemorial to the present day of Banda. Has a special history. The history of the origin of Banda is as follows. History of Banda till date.

History of Banda UP: Banda is a Lok Sabha constituency located in the state of Uttar Pradesh, India. Banda city is located in Bundelkhand region. Banda city is also the headquarters of Banda district. The city of Banda is situated on the banks of the Ken river (a river of Yamuna).

Naming of Banda District: Banda is a historical city. The city of Banda was named Bamda (later Banda) after Maharishi Vamdev. The Tapobhoomi of Maharishi Vamadeva is Banda.

Why Banda is famous: Banda is highly famous for the Onyx gems obtained from the Ken River, Large quantities of Onyx gems are exported from Banda. There are various mosques and Hindu temples here. Outside the city are the remains of the 18th century fort Kalinjar. During the conflicts between the Muslims, the Marathas, the French and the British, the administration of Banda city and fort kept changing.

Banda, a part of Allahabad division: During the British rule, Banda was a district in the Allahabad division of the United Provinces. In 1998, the new Chitrakoot district was carved out of Karwi and Mau tehsils from the district.

Banda’s Basrahi Fort: There is a thousand years old outpost in the village Basrahi of Banda district block Badokhar Khurd. People know this post by the name of Raja Parmal’s Garhi. King Parmal of Kalinjar had built a fort here. The name of this fort is Chaki. Here the king listened to the people and used to give his decision.

The Prehistoric Period of Banda: Stone sculptures and other remains from the Paleolithic and Neolithic periods found in Banda prove that human civilization was the same in Banda as it was in the rest of the country. In prehistoric times, tribals or primitive people lived in this area. The earliest Aryans associated with this region were mentioned in the Rigveda. The region is believed to have a rich historical background.

First Rule on Banda: The first ruler of the Banda region was the Yatris, whose eldest son Yadu inherited the region, later renamed Chedi-desh by his descendants.

Kalinjar Hill Banda: The hill known as Kalinjar is considered sacred and is mentioned in the Vedas. According to folklore the name of the famous Kalinjar-hill (Kalanjaradri) is derived from Lord Shiva himself, the main deity of Kalinjar who is still called Neelkanth. The place is also mentioned in the Hindu holy books Ramayana, Mahabharata and Puranas.

Sri Ramachandra’s exile: It is also believed that Lord Rama spent 12 out of 14 years of his exile in Chitrakoot, which until a few years ago was part of Banda.

4th century BCE Banda: The region of Banda was merged into the Nanda kingdom of Magadha around the 4th century BCE, later forming the region under the Maurya Empire until the death of Ashoka in 236 BCE.

Attack on Kiljar: Mahmud of Ghazni marched several times to Kiljar in the first half of the 11th century, but was resisted and sent back. During 1182 AD, the famous Chandela-king Parmardidev, known as Priyavraja, the Chauhan king of Delhi and Ajmer, was defeated.

Qutb-ud-din Aibak’s capture of Kiljar: The fort was captured by Qutb-ud-din Aibak (Muhammad Ghuri’s general) in 1202 AD, the Chandelas reclaimed their territory and during the 13th century AD this ruled over.

Lodi-sultans capture Kalinjar: The Lodi-sultans also captured Kalinjar for a while, but again returned to the possession of the Hindu king. The Mughal prince Humayun Miza attempted to reclaim it but the death of his father Babur in 1530 forced him to abandon the move.

The end of the Chandela rulers on Kalinjar: Sher Shah Suri besieged the fort of Kalinjar (1545 AD), but was killed during a battle exactly from its capture. Finally his son Jalal Khan was placed on the royal throne at Kalinjar Fort under the title of Islam Shah. The Chandela-raja and seventy of his soldiers were soon killed and thus the long Chandela-rule of Kalinjar came to an end.

Mughal possession of Kalinjar: Baghela-Raja Ram Chandra bought the fort of Kalinjar, but later Kalinjar was captured by Akbar’s representative Majnun Khan Kuksal and Kalinjar Fort became an integral part of Mughal dominion. Later, King Birbal made Kalinjar his fiefdom. During the Mughal rule most of the area under Banda district came under Kalinjar-Sirkar. There were ten palaces, of which there were six in Kalinjar-Sirkar such as Augasi, Sihound, Simoni, Shadipur, Rasin and Kalinjar is part of the present district of Banda.

Muhammad Khan Bangash 1728 AD: Muhammad Khan Bangash, the governor of Allahabad, tried to recapture Bundelkhand in 1728 but had to return. Chhatrasal’s second son, Jangalraj, received forts and lordships around Banda which was made the capital and the fort of Bhurgarh on the west bank of the Ken river was built sometime during 1746 AD.

Awadh Nawab in 1762: In 1762, the Awadh Nawab tried to conquer Bundelkhand, but the united forces of the Bundelas defeated the Nawab’s army near the Tindwari region. Commander Karamat Khan and Raja Himmat Bahadur had to jump into the Yamuna to escape.

Banda under Ali Bahadur: Ali Bahadur declared himself the Nawab of Banda, later Ali Bahadur lost his life while trying to capture Kalinjar Fort in 1802 AD. It was during the rule of Shamsher Bahadur, son of the deceased Ali Bahadur, who made Banda his abode. The Bundela people were never satisfied with this and they opposed the Nawab of Banda till the end. The Treaty of Basin in 1803, brought Banda legally under British rule, although the Nawabs of Banda opposed their accession. Himmat Bahadur, a one time friend of the Nawabs betrayed him and sacked the British and Nawab Shamsher Bahadur was defeated and had to accept the sovereignty of British rule in 1804 AD.

Contribution of Banda in the Revolution of 1857: In March 1819, the city of Banda was made the headquarters of the newly created Southern Bundelkhand district. Nawab Ali Bahadur II actively participated in the freedom struggle against the British during the Revolt of 1857. Then the residents of Banda district, inspired by the freedom fighters coming from the eastern districts, took up arms in large numbers against the British rule. On 14 June the British authorities left Banda and the Nawab declared himself independent. The Nawab of Banda not only organized his rule in Banda, but also assisted in revolutionary efforts elsewhere in Bundelkhand.

What is the place to see in Banda?