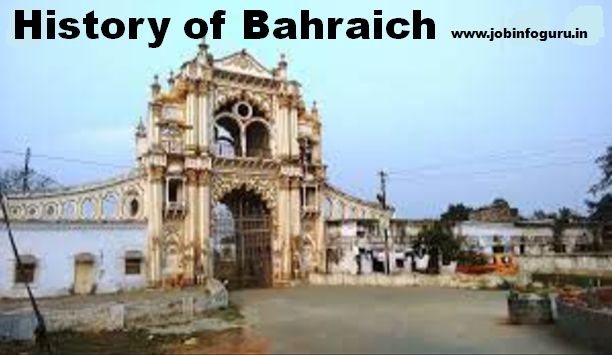 The glorious and grand History of Bahraich

Pride of Bahraich: Bharatvarsha boasts of its glorious history with its diversities, historically, Bahraich’s past has been extremely glorious. Bahraich has its own special place in terms of archaeological, historical, cultural, geographical and industrial terms. The ancient heritage of Hindu-Muslim communal harmony, spiritual, Vedic, mythological, education, culture, music, art, beautiful buildings, religious, temples, mosques, historical fortifications, glorious cultural arts have remained in their own right from the earliest times. The history of Bahraich’s origins is as follows. Bahraich’s information in history till date.

Ancient History of Bahraich Present and  Past Story Bahraich District

Mythical Period of Bahraich: Bahraich has been considered very important historically. Bahraich is famous as the capital of Lord Brahma. According to mythological beliefs, this region was developed by Brahma ji. Bahraich was also known as part of the Gandharva forest. Even today the north eastern region of Bahraich district is covered by forests. It is believed that Brahma covered Bahraich with forest as a place of worship for sages and sages. Hence this place is known as “Brahmich”. Sages and sages used to worship and meditate on Bahraich. The Pandavas are said to have visited this place with their mother Kunti during their exile.

Treta Yuga: Bahraich is a beautiful city situated on the banks of the Saryu River. The fast flowing rivers and dense green forests add beauty to Bahraich. The history of Bahraich is very old, it was ruled by Purushottam Shri Ram and his sons Luv and Kush. According to the Puranas, Lord Ram’s son Luv and King Prasenjit ruled Bahraich. Rishi Ashtavakra, the guru of Maharaja Janaka, also lived here. The sage Valmiki and the sage boy also lived here.

How was Bahraich named Bahraich?: It is believed that the name Bahraich was derived from Brahma, the creator of the universe. Sources say that there was an ancient Brahma temple here, thus the city was named – Brahmich, thus, Bahraich. Others say that the city got its name from the Maharishi’s ashram. Once Bahraich was inhabited by sages, munis (Hindu saints), bhikhu (monk monks).

Status of Bahraich District: Bahraich is situated in the north eastern part of Devipatan Mandal. Bahraich is located on the rail route between Nepalganj and Lucknow in east-central Uttar Pradesh and Nepal. To the north of the district Bahraich has an international border with Nepal. The rest of Bahraich district is surrounded by other districts of Uttar Pradesh. Lakhimpur Kheri and Sitapur in the west, Hardoi in the south, Gonda in the south-east, and Shravasti in the east.

Economy of Bahraich district: The economy of Bahraich district is based on agriculture, the main crops of the region include wheat, rice, sugarcane, pulses and mustard. Sericulture is one of the other occupations of the district. The area of ​​total forest cover in the district is 67926 hectares which is 13.97% of the total area of ​​the district. Most industrial units in the region depend on agricultural or forest-based products. Handicraft made from wheat stalks is a major product here.

Capital of the Bhar Dynasty Bahraich: According to some other historians in the medieval period, this place was the capital of the “Bhar” dynasty. Hence it was called “Bharaich”. Which later came to be known as “Bahraich”.

Chinese Traveler Hieuwtsang: The famous Chinese travelers Hieuwtsang and Feghyan traveled to this place. The famous Arab traveler Ibne-Ba-Tuta also traveled to Bahraich and wrote that Bahraich is a beautiful city, situated on the banks of the sacred river Saryu.

Bahraich’s contribution during the First Freedom Struggle of 1857

General Outam ruled the Oudh Company Bahraich: On 7 February 1856, the resident General Outam declared the rule of the Company over Awadh. Bahraich was made the center of a division and Mr. Wing field was appointed as its commissioner.

Commissioners during the freedom struggle Bahraich: Colonelganj Mr. C. W. Calif, Deputy Commissioner Lieutenant Bailey and Mr. Jordan were in Bahraich with two companies. Bahraich’s struggle was on a large scale. All the Raikwar kings were against British rule with all public support. When the conflict started, the three British officers went towards Himalayas via Nanpara. But the soldiers of the rebel kings blocked these paths. So he returned to Bahraich in order to go to Lucknow. But when they reached Behram Ghat (Ganeshpur), all the boats were under the control of the rebel soldiers. In which there was a serious struggle and all the three officers were killed. And Bahraich district came under the control of freedom fighters.

History of Bondi Fort Bahraich: On 16 November 1857 the British rule defeated the Nawabi army of Lucknow. After escaping from the British Begum Hazrat Mahal of Lucknow crossed the Ghaghra River from Lucknow to Mahmudabad with her son Virjis Kadar and reached Bondi. The history of Bondi is described in the compositions of many historians. In it, ‘History of Awadh’, Amritlal Nagar Kriti ‘Gadar Ke Phool’ and Tikaram Tripathi’s ‘Past of Bundi’ are seen.

Raja Veer Balbhadra Singh’s Role in the Freedom Struggle Bahraich: Raja Veer Balbhadra Singh of Chahalari has also contributed significantly in the freedom struggle. The rebellion began in Bahraich as soon as it started in Awadh. On 27 November 1857 Raja Balabhadra Singh of Chahalari lost his life during the war with the British near Chinhat. Even the British praised his bravery. The king of Bhitouni also fought and lost his life.

British Army Captures Nanparav Bahraich: On 26 December 1858, British Army captured Nanpara. The entire Nanpara was destroyed. The soldiers of the freedom fighters began to gather at the fort of Bargadia. There was a big struggle there. Around 4000 soldiers escaped and took refuge in Masjidiya’s fort but the British again destroyed the fort and there was a war in Dharmanpur. Lord Clive moved towards the other solvents living on the banks of the Rapti River.

Gandhiji’s visit to Bahraich: In 1929 Gandhiji visited Bahraich and held a public meeting. The high school where the meeting took place is now known as Maharaj Singh Inter College. Like other parts of the nation, Bahraich also reacted sharply when Gandhiji started his salt movement. On 6 May 1930, there was a total strike. The salt law was also broken. All prominent leaders were arrested. The next day a big procession took place and the effigy of British rule was burnt. 762 people gave their names for Gandhi’s Satyagraha. Out of which 371 were arrested.

Quit India Movement Bahraich: On 9 August 1942, when Gandhiji was arrested during the Quit India Movement, there was a sharp reaction in the district. A huge procession took place. In 1946, lines were drawn for the final freedom struggle. The day of independence was celebrated with great enthusiasm on 15 August 1947.

15 August 1947 Independence Day Bahraich: On 15 August 1947, Gandhiji’s dream came true and the day of independence was celebrated with great enthusiasm. It is said that 1375 refugees from Pakistan came to Bahraich and were resettled in the district.

Said Salar Masood’s Dargah Bahraich : According to local Jansruti, the word Bahraich is an aberration of ‘Brahmaraich’. In Bahraich, where is the dargah of Saeed Salar Masood, there was a sun temple in ancient times. It is believed that this temple was built by blind Kumari Johra Biwi of Rudauli. Firoz Shah, the Tughlaq Sultan of Delhi, is believed to have built the dargah.