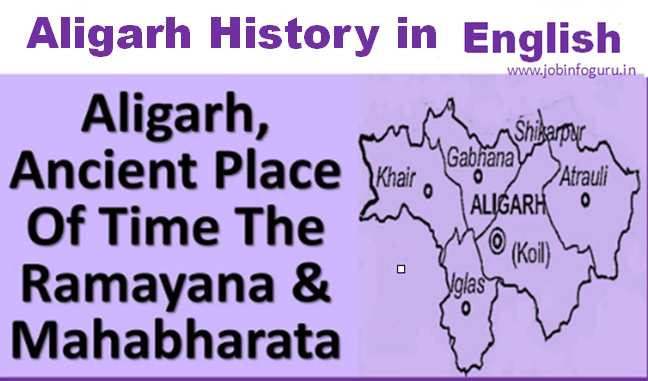 The glorious and grand story of Aligarh

Pride history of Aligarh: History of Aligarh Historically, Aligarh’s past has been extremely glorious and glorious. The ancient heritage of Hindu-Muslim communal harmony, spiritual, Verdict, mythological, education, culture, music, art, beautiful buildings, religious, temples, mosques, historical fortifications, glorious cultural arts, including Aligarh itself from the earliest times The history of the origin of Aligarh is as follows. Information of Aligarh till date in history.

Mahabharata period: Historically, Aligarh (Kol) is a very ancient site. According to the survey department of Mahabharata, about 5000 years ago, a Chandravanshi king named Kaushi (Kaushiriv – Kaushal) ruled here and then his capital was named Kaushambi. It is also mentioned in Valmiki Ramayana. After defeating the Chandravanshi king Kaushariva, a demon king named Kol became the king of the place and he named the place Kol after himself. It is a matter of time when the Pandavas brought their capital from Hastinapur (Bulandshahr). The present (Aligarh) was ruled by Kol for a long time.

Dwapara Yuga: According to folk tales, Lord Sri Krishna’s elder brother Balaram (Dauji Maharaj) passed through the Ramghat Ganga for a bath at the end of Dwapar era, then he stopped at the ancient historical site Sri Khereshwardham, about 5 km from Aligarh city on the local Khair road And after killing the monster Emperor Kol, where his weapon was washed and plowed, the name of the place became Haldua. The coins which are safe of 200 BC in Mathura Sangralah were also found in excavations near Harduaganj, Sasni and Lakhanu.

Mythological Aligarh: According to mythology, there used to be a sage named Kohi, whose ashram was named Kohila Ashram. Later this same Kohila became Cole. It is also believed that Maharishi Vishwamitra also had an ashram between Kohilashram and Mathura. The town of Veswa, located in the present Aligarh district, where the ancient historical lake Dharnidhar is a remnant of the same Vishwamitra Ashram. Being situated at the core of Aligarh Brajmandal, some historians also believe that this core word itself came to be known as Kol in the course of time. When the small kingdoms of the rulers of Aligarh were gradually established during the Mahabharata period, then the emperors of Rajput, Nand, Maurya, Shug, Shaka, Kushan, Naam, Gupta, and the emperors of Vardhan dynasty continued to dominate.

Cole – Aligarh: Aligarh was known as Kol or Koil before 18th century. Its history up to the twelfth century is a bit blurred. According to Ireland lawyer Edwin Atkinson, the place was founded and named by the Rajputs in the year 372. The name Aligarh is given by ‘Najaf Khan’.

Sidhgarh – Aligarh: Qutubuddin Aibak came here from Delhi in the year 1194. After its occupation, Akbar and Jahangir used to come here to hunt. Jahangir had mentioned about the Kol forests well. He had also told that he had also hunted a wolf. At the time of Ibrahim Lodi, Umar’s son, Muhammad built the Lodi Fort at Kol, renaming it from Kol to Muhammadgarh. After this, in 1717 AD, ‘Siddha Khan’ became the ruler of this region and rebuilt the Lodi Fort and named it Siddagarh Fort after its name and the name of the city Siddagarh.

Ramgarh – Aligarh: Jat king Surajmal of Mathura and Bharatpur took control over Kol in 1753. Due to his lack of fort at a very high place, he built an underground fort and when completed in 1760, named this fort Ramgarh. On November 6, 1768, Mirza saheb, a Sia Muslim chieftain, became the suzerain. In 1775, his warlord Afrasiyab Khan named Kol as Aligarh after Mohammad (Prophet) ‘s cousin and Damad Ali.

Battle of Aligarh: After the end of the power of Mysore in 1803, only Marathas had the power to fight against the British all over India. On 1 September 1803, there was a fight between the British and the Marathas at the Aligarh Fort. After this, the British also captured Aligarh. This occupation lasted until 1947. After that, India got independence from the British.

Chanakya’s workplace Aligarh: The history of Chanakya testifies that the place of diplomatist Chanakya was also up to Kol. After the Kalinga conquest, Ashoka the Great built a victory memorial in which the place named Kautilya is also mentioned, this Kautilya was none other than Kol.

Forts of Aligarh: According to the archaeological context, there were two forts in Aligarh, one on the fort above Kol Tila and the other is situated on the Barauli road to the north of the Muslim University.

Aligarh in Jain-Buddhist period: In the Jain-Buddhist period also the name of this district was Kol. Seeing the statues obtained from Maharaval, Panjupur, Khereshwar, etc., placed in different museums, it confirms the rule of the kings of Buddhist and Jain times.

The reign of dynasties in Aligarh: Professor Jamal Mohammed Siddiqui of the history department of Aligarh Muslim University, in his book ‘Historical Survey of Aligarh District’, mentions about 200 old settlements and mounds which hide the remains of many dynasties inside them. According to S R Neville, author of Aligarh Gazetteer, “When Delhi was ruled by King Anangpal Singh of the Tomar dynasty, Vikramsain was ruled in Baran (Bulandshahr). In this dynasty tradition, Mukundasain, son of Kalisain was followed by Govindasain and then Vijayiram.

Qutbuddin Aibak: In 1194 AD, Qutub-ud-din Aibak moved from Delhi to Koil which was one of the “most celebrated fortresses of Hind”. Qutb-ud-din Aibak appointed Hisam-ud-din Ulbak as the first Muslim governor of Koil.

Ibn-Batuta: Koil is also mentioned in Ibn-Batuta’s Rihla (Kitab-ul-Rehla details the travelogue of the Moroccan traveler Ibn Batuta), when the Mongol dynasty of the Yuan dynasty of China in 1541 with Ibn-Batuta The city of Koil traveled to the coast of Kambay (in Gujarat) in 1341 with 15 ambassadors representing the emperor Ukhuntu Khan. Ibn-Batuta appears that the district was in a very troubled state when the Emperor’s embassy escort helped relieve Jalali from the invading body of Hindus and lost one of their officers in the fighting. Ibn Battuta called Koil “a fine city surrounded by mango groves”. From such groves, Koil’s environs would have acquired the name of Sabzabad or “green country”.

Jai Singh: With the protection from Jai Singh of Jaipur, the Jat ruler Surajmal and the Muslim army captured the fort of Koil in 1753, Bargujar Raja Bahadur Singh continued to fight another fort under him, “Battle of Ghosar” Known by name. It was named Ramgarh . when the Shia commander Najaf Khan captured Kol, he gave it the of Aligarh. The Aligarh Fort (also called the Aligarh Fort), as it stands today, was built by French engineers under the control of French officials Benoit de Boigne and Peron.

Revolution of 1857: Aligarh was the main center of the Sepoy-Revolt of 1857. Aligarh city has a high Muslim population.

Akbar’s reign: In the reign of Akbar, Koil was made Sirkar and included the teams of Marahar, Kol Ba Haveli, Thana Farida and Akbarabad, Akbarand Jahangir went on a hunting expedition. Jahangir explicitly mentions Kol’s forest, where he killed wolves.

City of Locks (Aligarh): Aligarh is an important commercial center of Uttar Pradesh and is famous as the “City of Locks” throughout the country. Aligarh locks are exported all over the world.

Status of Aligarh: Aligarh is also known as Tala Nagari. The Aligarh border line is situated on the east by Kasganj, on the west by the state of Haryana, on the north by Sambhal, Gautam Budh Nagar and Bulandshahr and on the south by Hathras and Mathura. Two rivers Ganga and Yamuna pass through Aligarh.

What is the place to see in Aligarh?