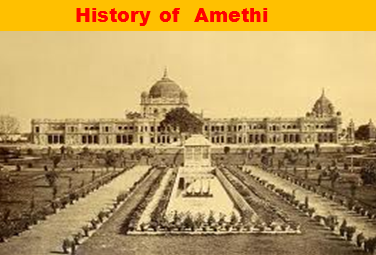 Glorious and grand story of Amethi

History of Amethi: History of Amethi Historically, the past of district Amethi has been highly glorified. Amethi existence has remained intact despite the many messes of the eternal rule of change. The history of origin of Amethi is as follows. To date information of Amethi in history.

Amethi Uttar Pradesh: Amethi is a city located in the district of Amethi in the state of Uttar Pradesh, India. Amethi district comes under Faizabad division of Uttar Pradesh. Before the formation of Amethi district, it was under the Sultanpur district. Gauriganj town / tehsil is the headquarters of Amethi district. Amethi was made the 72nd district of the state of provocation. This district was formed on 1 July 2010 in Tehsil Amethi, Gauriganj, Musafirkhana and Rae Bareli Tehsil Tiloi and Salon in Sultanpur district. Initially its name was Chhatrapati Sahu Ji Maharaj Nagar. Later this name was changed to Amethi. Amethi is an important city and nagar panchayat area in the district. It is also called Raipur-Amethi. It is the work place of Gandhi family of India. Former Prime Minister Jawaharlal Nehru is represented by his grandchildren Sanjay Gandhi, Rajiv Gandhi and his wife Sonia Gandhi. In the 2014 general elections, Rahul Gandhi was elected from here.

Establishment of Amethi district: Amethi is the 72nd district of Uttar Pradesh called B.S.P. It was officially brought into existence on 1 July 2010 by the government. Before the formation of Amethi district, it was under the Sultanpur district.

Amethi district status: Sultanpur in the east of Amethi district, Raebareli in the west, Barabanki and Faizabad in the north and Pratapgarh in the south. Amethi’s old name and surname is Chhatrapati Shahuji Maharaj Nagar. District Amethi is situated at an altitude of 101 meters from the latitude 26 degrees 9 minutes north latitude and 81 degrees 49 minutes east of Desantar and Sumadra. The entire geographical area of the district is 2329.11 Sq Km.

Maharishi Pippalad’s holy mythological ashram: Maharishi Pippalad’s ashram is located on the east bank of the Manorama River in the Piparpur Gram Sabha. Here Chilbila can be reached via the village called Fatuhwa by the route Chilbila from the Sharda Canal. The statue of Maharishi and the life of the iconic Shiva Linga is installed in the ashram.

Kadunala Yuddha Amethi: A historical place located in Musafir Khana Tehsil where in 1857, ‘Bhalesultan Kshatriyas’ fought with the British, in which hundreds of Kshatriyas sacrificed their lives. In memory of which a huge martyr memorial was constructed on the Thauri Marg, 5 km west of Musafir Khana Tehsil, next to the Kadunala Bridge, and every year a fair is organized here on the day of Kartik Ekadashi.

History of Amethi State: Originally Amethi was established on 1 July 2010. But the history of the princely state of Amethi is more than a thousand years old.

Raja Visheswar Baksh: The British also attempted to merge the princely state of Amethi in which they were unsuccessful. In 1842 Raja Visheshwar Bakhsh Singh died. After her death Rani sati took her husband’s dead body in the lap. According to the belief even today the women of the region organize Durduriya at the Sati Maharani temple every Thursday and seek the blessings of staying suhagin.

Political history Amethi the stronghold of the Gandhi family: Actively participated in the power-rich national-political Gandhi family in Amethi region in 1975 when the youngest son of the then Prime Minister Indira Gandhi, Sanjay Gandhi in Kherauna the most backward village of Amethi some youths from all over the country Took a move to enter politics through Shramdan with Congressmen.

Rajiv Gandhi: The Gandhi family after some time out of this shock brought Rajiv Gandhi into active politics as a result of the efforts and requests of various leaders including Rajkumar Sanjay Singh who belonged to the political family of Amethi and he became MP from Amethi in 1981 and Till the last time of his life (May 20, 1991) Amethi was in Parliament.

The assassination of Rajiv Gandhi: The country was moving towards another election again, during this time, during the election campaign in 1991, Rajiv Gandhi was brutally murdered. This was the biggest shock for the Gandhi family so far, as Sonia was accompanied by her young children Rahul and Priyanka. Congress got its political advantage and returned to power. At the same time Rajiv Gandhi’s legacy of Amethi was handled by Captain Satish Sharma, very close to his family. Satish Sharma also benefited from his close association with the Gandhi family, and not only did he become an MP twice in a row, but was also given the charge of Petroleum Minister at the Center. During his tenure, the foundation stone of Rajiv Gandhi Petroleum Institute was laid in Amethi region. Classes have been operating here since 2008.

Rahul Gandhi: Rahul Gandhi became MP from Amethi for the first time in the 2004 general election in the 2014 elections also the people of Amethi chose Rahul Gandhi whose rivals were Smriti Irani and Kumar Vishwas.

Samriti Irani: Samriti Irani became MP for Amethi for the first time in the 2019 general election defeating Rahul Gandhi in 2019 and won it.