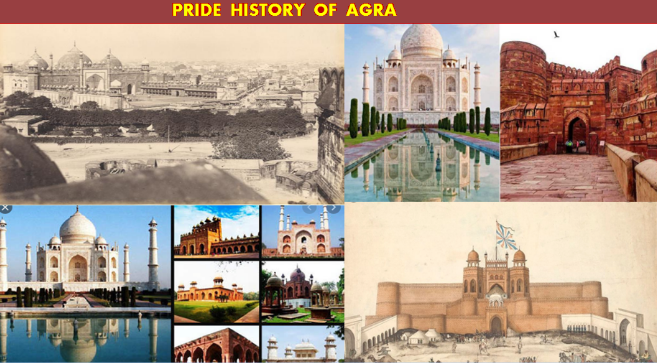 THE GLORIOUS AND GRAND STORY OF AGRA

Pride history of Agra: The ancient heritage of Hindu-Muslim communal harmony, spiritual, Vedic, mythological, education, culture, music, art, beautiful buildings, religious, temples, mosques, historical fortifications, glorious cultural arts have been found in Agra since its inception. The history of the origin of Agra is as follows. Information of Agra in history till date.

Agra, Uttar Pradesh: Agra has been as the first district of Uttar Pradesh. Due to the design of Agra Fort, it was also included in the list of World Heritage by UNESCO. Agra is located on the banks of the Yamuna River, just two and a half kilometers from the Taj Mahal, one of the 7 wonders of the world.

Mythical Agra: Agra is a historic city which has many places to see. The history of Agra is mainly known from the Mughal period but it is related to Maharishi Angira who was 1000 years BC. The first mention in the history of Agra is believed to be from the time of the Mahabharata, when it was addressed by the name of Agarbana or Agarvan. It is said that earlier this city was also known as aryagrah.

Angira to Agra: Earlier, during the Mahabharata, Agra was called Agrawan or Agrabana. Agra is related to the sage Angira, Which happened in 1000 BC. Taulmi was the first to address it as Agra.

Maha kavi Surdas’s relation with Agra: This is the land of Braj. The city of Surdas and Rahim is also called the city of love. His guru met Mahakavi Surdas here. The story of devotion in Agra is very old. There is a Mankameshwara temple of Lord Shiva in the city of Agra which is also very ancient. This temple is of Dwapara Yuga. By the way, there is also Bateshwar, the city of temples in Agra district.

Establishment of Agra: Before the rise of the Delhi Sultanate, the history of Agra was not clear. According to public opinion, Agra was founded in 1475 by Badal Singh. Sikandar Lodi founded the city of Agra in 1504 AD. Agra was a favorite place of the Mughal Empire. Agra was the capital of the Mughal Empire from 1526 to 1658. Even today, Agra is a famous tourist destination due to Mughal buildings such as Taj Mahal, Red Fort, Fatehpur Sikri etc. These three buildings are included in the list of UNESCO World Heritage Sites. Babur (father of Mughal Empire) built square (rectangular and square) gardens here.

Status of Agra city: Agra city is located 206 kilometers (128 mi) south of the national capital, New Delhi. Agra is the third largest city in Uttar Pradesh. Agra is a city located on the banks of river Yamuna 27.18 ° North 78.02 ° East. Its average elevation is about 171 meters (561 ft) above sea level. Agra is bounded by Mathura in the north, Dhaulpur in the south, Firozabad, Shikohabad in the east, Fatehabad in the southeast and Bharatpur in the west.

Sultan Sikander Lodi (Nizam Khan): Sultan Sikandar Lodi, the Muslim ruler of the Delhi Sultanate, founded Agra in 1504, and in 1506 AD Alexander Lodi made Agra his capital. Agra was an old settlement before the time of Alexander Lodi (1488–1517) in the 17th century. Sultan Sikandarshah Lodi built a military cantonment in place of present Agra to suppress the rebellions that took place during his reign, by which he helped suppress the rebels of Etawah, Bayana, Kol, Gwalior and Dholpur. According to the author of ‘Makhjan-e-Afghan’, Sultan Sikandarshah had tasked some clever commissioners to build a military cantonment at any of the above mentioned areas in the vicinity of Delhi, Etawah and Chandwar and after considerable scrutiny ( Agra) was chosen. A few days later, Sinkdarshah also came and resided here. According to the author of ‘Datidaudi’ Sikandarshah used to stay in Agra often. After the death of Sultan, the city of Agra was handed over to his son Sultan Ibrahim Lodi.

Agra destroyed by earthquake: On Sunday, July 7, 1505, there was a major earthquake in Agra, which caused a lot of damage to the city that was settled a year ago. Due to which many beautiful buildings collapsed. According to the author of ‘Makhzan’, the tremor was so terrible that buildings and mountains had collapsed due to its rashes and the holocaust was visible.

Mughal rule: Zaheeruddin Muhammad Babur defeated Ibrahim at the Battle of Panipat on 21 April 1526 and established the Mughal Empire in India by killing him. The golden age of the city began with the Mughals. Agra was formerly known as Akbarabad and remained the capital of the Mughal Empire until 1648 of the Mughal Empire under Emperor Akbar, Jahangir and Shah Jahan. Akbar made it the designated seat of one of his original twelve epithets (royal top-level provinces), frontier (Old) Delhi, Awadh (Oudh), Allahabad, Malwa and Ajmer Suhahas.

Babur: Zaheeruddin Muhammad Babur defeated and killed Ibrahim Lodi (Lodi dynasty) in the Battle of Panipat on 21 April 1526 AD and established the Mughal Empire in India. After defeating Ibrahim Khan Lodi, on 10 May 1526, the Mughal emperor Babur reached Agra when he was disturbed by the heat. He decided that a rest house would be built in which the cold would be there. He built this place on the banks of the Yamuna and named it Hist-Bahisht. At that time people used to call it Aaram Bagh. Later, when the Marathas ruled Agra, they changed the name to Rambagh. Since then, this name has been known. Babur made his kingdom successful by winning Khanwa 1528 in Chanderi in 1527 and Agra in 1529 and died in 1530 AD.

Persian garden: Akbarabad (Agra) was one of the most important cities in India under the Mughals, so it saw a lot of building activity. Babur, the founder of the Mughal dynasty, placed the first formal Persian garden on the banks of the Yamuna River. The garden is called the Aram tiger or the garden of rest.

Sher Shah Suri (Farid Khan): Sher Shah Suri ruled between 1540 and 1556 in Agra. Sher Shah Suri had earlier worked as a soldier for Babur, who promoted him to commander in chief and then appointed Governor of Bihar.

Akbar: Agra’s advancement began during the time of Mughal emperor Akbar. Babar’s grandson Akbar the Great started building a red stone fort here in 1565, which was completed in eight years. Apart from making Agra a center for learning, art, commerce and religion, raised the huge banks of the Red Fort. Akbar also built a new city on the outskirts of Fatehpur Sikri in 1569 AD. The city was built in stone as a Mughal military camp. Akbar made Fatehpur Sikri his capital at the beginning of his rule, but in 1586 AD, Akbar again brought his capital to Agra.

Jahangir (Muhammad Salim): Jahangir was the son of Akbar. After Akbar’s death, Jahangir was crowned with coronation on 3 November 1605 in Agra, and took over the rule of the Mughal Empire. Akbar’s son Jahangir had a love of flora and fauna.

Shahjahan (Khurram): Shah Jahan was the son of Jahangir and grandson of Akbar. On 24 February 1682, Shah Jahan became the new emperor of the Mughal Empire. Shah Jahan gave Akbarabad the most valuable monument, the Taj Mahal in 1653, in memory of his wife Mumtaz Mahal. The Mughal Emperor Shah Jahan built the Chandni Bagh spread over 25 acres on the banks of river Yamuna between 1631 and 1635. Shah Jahan shifted the Agra capital to Shahjahanabad (Old Delhi) during his reign in 1649 but his son Aurangzeb brought the capital back to Akbarabad. He seized the throne from the father and imprisoned them in the fort. During the reign of Aurangzeb, Akbarabad remained the capital of India.

Aurangzeb: Aurangzeb was the sixth Mughal emperor to rule India. During the reign of Aurangzeb, Akbarabad remained the capital of India. Aurangzeb’s rule lasted from 1658 until his death in 1707. Until Aurangzeb shifted the Deccan to Aurangabad in 1653. With the death of Aurangzeb, Mughal rule also came to an end. This was followed by the emergence of several regional states in the city. After the Mughal period, the city of Agra was ruled by Marathas, Jats and British.

Maratha Suzerainty: With the fall of the Mughal Empire, the city remained under the Jats, Marathas, Mughals and the rulers of Gwalior respectively in the late 18th century and hence came under British rule in 1803. From 1833 to 1868, it was the capital of Agra province (later Northwestern province).

Religion in Agra: Agra is the birthplace of religion called Din-i Ilahi. Which flourished during Akbar’s reign and the Radhaswami faith, which has around two lakh followers worldwide. Agra has historical connections with Shorepur of Jainism and Ranuka of Hinduism in 1000 BCE. In the second century, the Geographer Ptolemy marked it on the world map as Agra.

Presidency of Agra: When the Presidency of Agra was established by the British in 1835, the city became the seat of government, and only two years later it witnessed the Agra famine of 1837–38.

Evidence of the First War of Independence of 1857: During the First War of 1857, the news of rebellion reached Agra on 11 May and on 30 May, 2 companies of the 44th and 67th Regiment of infantry revolted and moved to Delhi. British on 8 July Got permission to restore order. The next morning in Agra, native Indian troops were forced to revolt on 15 June at Gwalior (which lies to the south of Agra). By 3 July, the British were forced to return to the fort. Two days later a small British force was defeated at Sucheta and forced to withdraw. British rule was again secured in the city until India’s independence in 1947.

Places to Visit in Agra: Agra clearly depicts rich historical monuments. Agra is also known as the land of palaces. Taj Mahal, one of the seven wonders of the world, Agra is one of the most prominent tourist destinations in Uttar Pradesh. The Mughal dynasty contributed immensely to the establishment of magnificent monuments and buildings such as the Taj Mahal, Agra Fort, Fatehpur Sikri and many more. Under the reign of Mughal kings such as Akbar, Jahangir and Shah Jahan, the history of Agra reached its grand peak. It was Akbar who developed the city as a seat of art, culture, education and commerce.

Agra is more famous as the ‘city of Taj Mahal (17th century)’. Other monuments here include the 16th-century fort built by Akbar, which houses the 17th-century white marble Moti Masjid and the Jahangiri Palace. Agra also has a mausoleum known for its architecture and the huge Jama Masjid. To its northwest is the tomb of Akbar at Sikandra.

Which are Historical places of Agra?

Church of the Sepulchre of Saint Mary, also Tomb of the Virgin Mary

Catering: Although the Petha of Agra is very famous, but there are many things which are included in the of Agra. Things like Jalebi and Kachori, Bedai and Chhole in the morning are the main food and drink here.