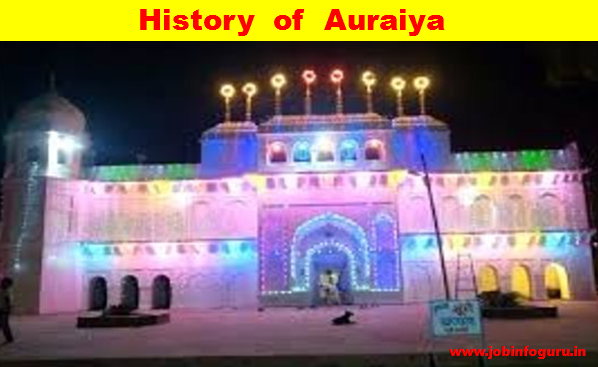 Auraiya’s pride: Auraiya’s history Historically, Auraiya’s past has been highly glorified. Auraiya existence has remained intact, despite the many conflicts in the eternal rule of change. The history of Auraiya’s origins is as follows. Information of Auraiya in history till date.

Establishment of Auraiya district: Auraiya’s history as a district is new. On 17 September 1997, a new district was created by cutting Auraiya and Vidhuna, two tehsils of Etawah district and its headquarters at a place called Kakor in the middle of about 22 km route from the main railway station Dibiyapur to Auraiya.

Situation of Auraiya district: Kannauj district in the north, Yamuna river and district Jalaun in the south, district Kanpur Dehat in the east and Etawah district in the west. Auraiya district headquarters is located on National Highway No. 2 Mughal Road, which is 105 km west of Kanpur metropolis and 63 km east of Etawah district headquarters. The historicity of the region connects it with the pride of the Marathas to the history of Awadh which was included in the Panchal kingdom in ancient times.

Ahmad Shah Durrani sent Rohilla chieftains to large parts of the country: Dhunday Khan was sent to Shikohabad, Inayat Khan (son of Hafiz Rahmat Khan) to Etawah which was under the occupation of the Marathas. In 1762 a Rohilla army was sent under the leadership of Mulla Mohsin Khan to seize property from the Marathas, this army was opposed by Kishan Rao and Bala Rao Pandit (committed to protecting the Yamuna crossing) near Etawah city. The fort of Etawah was besieged by Mohsin Khan but the fortress soon surrendered and the district passed into the hands of the Rohillas.

Inayat Khan’s Revenue: Zamindars refused to pay Inayat Khan tax and waived the right of disobedience in their forts. Strong military forces led by Sheikh Kuber and Mulla Baz Khan and some cannon were sent to Rohilas to eat the zamindars of the Kamayat of the Jamuna crossing area opposed Inayat Khan’s authority. After that Hafiz Rahmat and Inayat Khan themselves came to Etawah and intensified the proceedings against the landlords and they finally agreed to the treaty. Later Hafiz Rahmat moved to Bareilly and Rohilla posts were established in the district.

Raja Najib Khan’s rule: Raja Najib Khan emerged in Delhi. Najib Khan is also known as Najib-ud-Daula, Aamir-ul-Umra, Shuja ud-Daula. Nabab Wazir succeeded in Safdar Jung and captured the property from Bangash to Aligarh, apart from the land given by Rohillas by Durrani, but the Afghans of Farrukhabad did not tolerate Najib Khan’s hostility and in 1762 he joined the attack on Farrukhabad Convinced Najib-ud-Daula The attack was won with the help of Hafiz Rahmat Khan and once again the matters were resolved peacefully. The ambitious Najib-ud-Daula was greatly irritated by the Rohillas’ intervention from the Bangla country on behalf of Ahmad Khan in 1762 and he was also engaged in hastily pursuing his plans for revenge Hafiz Rahmat in 1770 Started plotting for the downfall of Khan.

What is the place to see in Auraiya?