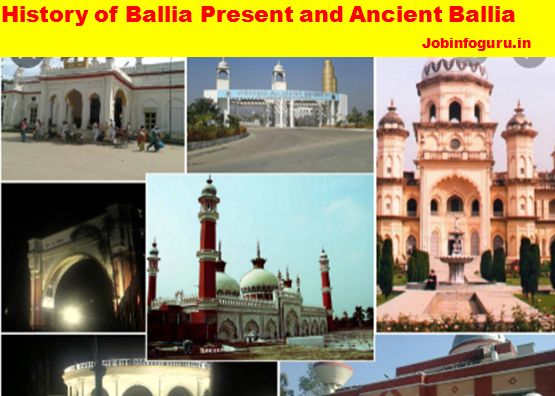 Ballia Naming: Ballia derives its name from the name of Ballia, King Bali, according to legend, King Bali made Ballia his glorious capital.

History of Ballia: Valmiki, Atri, Vashishta, Jamdagni, Bhrigu, Durvasa, many sages, sages, saints, saints, the pride of being the penance and ashram of Mahatmas has been in the history of Ballia since the Vedic period. Ballia was an integral part of the Kosala Empire in ancient times. India has its glorious history with its diversity, historically the past of Ballia district has been very glorious. Ballia has its own special place in archaeological, historical, cultural, geographical and industrial point of view. The ancient heritage of Hindu Muslim communal harmony, spiritual, Vedic, mythological, education, culture, music, art, beautiful buildings, religious, temples, mosques, historical forts, glorious cultural art of Ballia from time immemorial till now. Has a special history. The history of the origin of Ballia is as follows. History of Ballia till date.

History of Rebel Ballia: Ballia, also known as Rebel Ballia, is a city in the Ballia district of Uttar Pradesh state, India. Dadri-Mela is the famous fair which is celebrated in the month of Ashwin on a plain situated at the confluence of the Ganges and Saryu rivers on the eastern boundary of the city. It is present through rail and road in regular connectivity with nearby districts as Mau, Azamgarh, Deoria, Ghazipur and Varanasi.

Puranic Ballia: Ballia is considered to be very important historically. Many great saints of India like Jamadagni, Valmiki, Bhrigu, Durvasa etc. had their ashrams in Ballia. After Maharishi Bhrigu came to this land and built an ashram, Ballia was known as Bhrigukshetra. After this his disciple was known as Dardar Kshetra by the name of Dardar Muni. Ballia was a part of the Kosala kingdom in ancient times. It also came under Buddhist influence for some time. It is considered to be the land of King Bali. It was named Ballia after him.

Buddhist History Ballia: Many important information about this land is also found in Buddhist history. Dr. Bhimrao Ambedkar has written in his book “The Buddha and His Dhamma” that – Prince Siddhartha learned the methods of yagya, rituals and sadhana by staying for some time in the ashram of Maharishi Bhrigu.

History of Veer Lorik Ballia: The history of Veer Lorik is related to this district, it has been said about his valor that he separated the stone into two parts with his sword itself, even today that stone is present in Ballia rebel Ballia Also known as.

How Ballia got its name: According to folklore, Ballia was named after the demon king Bali, King Bali made Ballia his capital. There are many stories behind the naming of the name Ballia, it is believed that the name of the city of Ballia is derived from the name of the famous saint of Indian history, Valmiki. Local people believe that Valmiki, the author of Ramayana lived in this city, so a temple was built there at that place. However, the temple no longer exists. According to another story, the city is named as Ballia because of the soil quality of the land. Ballia has a sandy soil and this type of soil is known as ‘Ballua’. It is believed that the city was initially called ‘Ballian’ and then changed as ‘Ballia’.

Ballia Old name and surname: Ballia is also known as Baghi Ballia due to its significant contribution in the freedom struggle of India.

History of Dharmaranya Pond Ballia: In the north of Ballia district, there is a pond called Dharmaranya, near which a ‘Sangharam’ of Buddhists was situated in the very ancient times. It is described by the Chinese traveler Fahien under the name ‘Great Peace’. Yuvanchwang has also described this sangharam as the abode of Avidvakarna sadhus. Bhrigu’s ashram is said to be near Dharmaranya Pokhar. It must have been established at the place of ancient Sangharam after the decline of Buddhism.

Movement of Ballia in 1942: During the Quit India Movement of 1942, the region achieved independence for a short period of 14 days and formed a separate independent administration under the able guidance of leader Chittu Pandey. The Martyrs Memorial in Ballia was built in honor of the martyrs during the 1942 freedom struggle. The local government also lasted for a few days under the leadership of Chittu Pandey, but later the British regained their power.

Birthplace of India’s Freedom Fighters: Mangal Pandey, India’s first freedom fighter, was born in Ballia. Apart from this, Chittu Pandey, a well-known hero of the ‘Quit India Movement’, was also born in Ballia. National heroes and freedom fighters of “Quit India Movement” Pt Tarakeswar Pandey, Ram Pujan Singh and Hari Ram were also from Ballia. Late Chandra Shekhar, former Prime Minister of India, was a native of Ballia district. Late Ram Nagina Singh was the First M.P.from Ballia 1952. Late Gauri Shankar Rai was a native of Karnai village in Ballia, he was also a member of the UP Legislative Assembly, Legislative Council and Parliament. He also represented Ballia Assembly Constituency in the Legislative Assembly from 1957 to 1962 and MLC from 1967 to 1976 and was MP from Ghazipur Parliamentary Constituency from 1977 till its dissolution. He addressed the United Nations General Assembly in the 1978 session along with the then External Affairs Minister, former Prime Minister Atal Bihari Bajpai. Both addressed Gen.Assembly in Hindi for the first time in the history of UNO. Among the prominent leaders, self Gauri Shankar Bhaiya, Kashinath Mishra, Manager Singh, MP Bharat Singh Ramgovind Choudhary, Atul Kumar Soni etc. are famous, here Veer Kuwar Singh’s maternal grandmother is also there. The former Prime Minister of India, Chandrashekhar was also a native of this district. Jayaprakash Narayan, the father of the post-emergency revolution and the great freedom fighter, was also a native of this district. Janeshwar Mishra, a socialist thinker and popularly known as ‘Chhote Lohia’ in the country, was also a resident of this.

Muslim invasion and rule in Ballia: The first of the Muslim invaders in 1194 AD, Qutubuddin Aibak came to the Qutubganj Ghat on the outskirts of Ballia district. In 1202 AD Ikhtiyar Muhammad captured the prosperous city of Kathora and Qutubganj, situated on the banks of the Ghaghra river. It would be pertinent to mention here that a very small state in Ballia district, Haldi, whose successful Tilak-dhari king Shri Ramdev Ji was successful, could never be conquered by Muslim invaders.

Sikandar Lodi Ballia: In 1493 AD, Sikandar Lodi came to Kathora, situated on the banks of Ghaghra river in Ballia.

Battle of Babur and Mahmud Lodi in Ballia: On 05 May 1529, Ballia witnessed the first water and land war of medieval history between Babur and Mahmud Lodi. In which Babur was victorious. After the death of the Mughal emperor Aurangzeb, Rajput landlords began to rule in Ballia. But in the year 1719, when Muhammad Shah ascended the throne of Delhi, he started collecting rent from these landlords.

Contribution of Ballia to Hindi Literature: Ballia has contributed a lot to Hindi literature as prominent scholars like Hazari Prasad Dwivedi, Amarkant, Parashuram Chaturvedi are from this district.