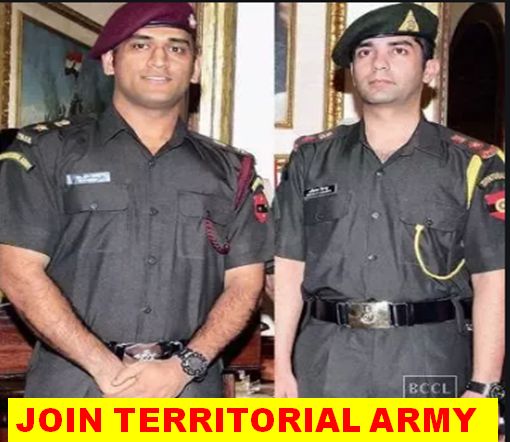 7- Ex Servicemen Havildar Recruitment in TA in all categories

Citizenship:- The candidate should be a citizen of India.

Age Limit for TA:– The candidate should be of an age between 19 and 42 years, on the date of application.

Educational Qualification:- The candidate should at least have done graduation or its equivalent.

Bodily Strength:- The candidate should be both physically and mentally healthy.

Not Eligible:- The people who are currently serving in the Regular Army, Navy force, Air Force, Police, GREF (General Reserve Engineer Force), Para Military and other such forces are not allowed to apply for TA.

TA Army Eligibility Criteria for Ex-Servicemen:- Only Ex-Service Officer can apply who are in the age group of 18 to 42 years can apply. Candidates must be a graduate and physically and mentally fit. And Serving member of the Regular Army/ Navy/ Air Force/ Police/ GREF/ Para Military and other forces are not eligible.

Civilians:- They can fill the online application form available on the official website. There are three stages to qualify one after the, which are as follows-

3)-Medical Examination of the physical standard by Military Hospital

Time of Exam:- Each paper is held for 2 hours (for Civilians only)

Type of Exam:- Objective questions type- OMR based paper (for Civilians only)

Note:-The written exam is only for Civilians. There are two papers, Paper 1 and Paper 2. And, each paper will be of 100 marks. So, in total, the whole written test is of 200 marks.Each paper will be further divided into two parts. Each section of the paper will comprise of 50 questions carrying 50 marks (1 mark per question).

Doc required for Application of TA Army:- The online form available on the official website of the Territorial Army can be downloaded (free of cost). Then the following details and documents are needed:

3- A copy of Identity proof which has photographs attached to it (Voter ID/PAN Card/Aadhar Card/Passport/Driving license etc).

4- Domicile certificate or any other Residential proof.

6- The people who are employed in Central Govt/ Union Territory/ State/Semi Govt/ Private Sector Authenticated by Head of office are required to bring Service certificate along with a No Objection Certificate by the department as per format mentioned in the official form.

7- The self-employed candidates have to submit an Affidavit on Non-Judicial stamp paper of minimum value duly attested stating nature of their employment and annual income. This has to be attached with a photocopy of PAN card and self-attested character certificate.

9-A Copy of Certificates / Reports of all Courses.

10-Copy of latest Income Tax Return (ITR) filed as a legitimate proof of your income.

TA Army Vacancies:-The vacancies for the posts (for both male and female) in the Territorial Army are released every year according to the need of the recruitment by the organization.

TA Army Exam Cut Off:-The cut off of Territorial Army will be displayed on the official website of the TA. It slightly varies from year to year as the following factors are taken into consideration:

1)- Number of candidates appearing in the exam.

3)-Total vacancies for the particular year.

TA Army Salary Structure:- The rank pay, entitlement to medals and honors, allowances, and several service benefits to the Territorial Army are provided as applicable in the case of the Regular Army.TA officers are also entitled to TA Decoration after completing 20 years. In fact, if the candidates do well and fulfill the required eligibility conditions, they can be promoted to the military rank of Lieutenant Colonel. Officers commissioned in Infantry TA may be called for the military for a longer duration depending on the requirement.

TA Army Pension:- Officers with 20 years and  (JCO) and other ranks with 15 years are given Pension.

Note:-If you are planning to appear for TA, then prepare with all your heart. There is no other job that will satisfy all your desires of having a challenging, adventurous, social status, prestige and quality of life. And, the pride, status, honour you will feel while wearing the uniform for your fellow countrymen has no other match. Good luck for your journey towards serving the nation!