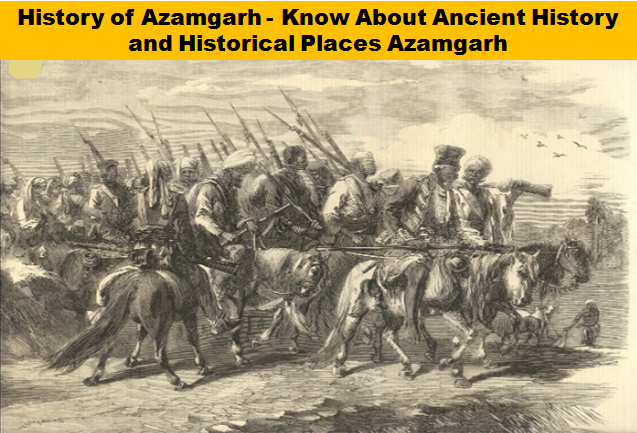 GLORIOUS AND GRAND STORY OF OF AZAMGARH

Pride of Azamgarh: The year India boasts of its glorious history with its diversities, historically the past of Azamgarh district has been very glorious. Azamgarh has its own special place from the archaeological, historical, cultural, geographical and industrial point of view. The ancient heritage of Hindu-Muslim communal harmony, spiritual, Vedic, mythological, education, culture, music, art, beautiful buildings, religious, temples, mosques, historical fortifications, glorious cultural arts, etc., have been included in Azamgarh itself since. Adikavi seems to be observing his past by hiding the mythological, prehistoric and historical facts and beauty of Maharishi Valmiki’s penance, the holy Azamgarh through the flow of holy Tamsa. The history of the origins of Azamgarh is as follows. Information of Azamgarh till date in history.

Azamgarh the work place of great sages: Mahamuni Atri in Azamgarh and the symbol of truth is wife Anusuya three son Maharishi Durvasa, Dattatreya and Maharishi Chandra have a glorious history.

Maharishi Durvasa’s Taposthali Azamgarh: This earth has been the taposthali of sages and munis. The Tridevs increased its value by making this place a karmabhoomi and taposthali. Azamgarh is also known as the land of sage Durvasa, whose ashram was located in Phulpur tehsil, 6 kilometers (3.7 mi) north of Phulpur tehsil headquarters, near the confluence of the Tamsa and Majhu rivers. Maharishi Durvasa, a part of Lord Shiva, was built on the banks of the Tamsa River in its taposthali Treta Yuga, it is still a major center of faith.

Azamgarh, the Kosala State of Ramayana: According to mythological beliefs, this region was a part of the Kosala kingdom in the Ramayana. Sage Vishwamitra took Rama-Lakshmana along the banks of Sarayu (Ghaghra) and took him to Janakpur Sita Swayamvar via Ballia. According to Janashruti, he had rested one night at Dohighat on the Saryu coast, which is why it was named Doharighat.

The rule of Mughal emperor Jahangir (Mehangar) Azamgarh: Mehanagar Azamgarh, which is located 30 km from the district headquarters, is connected with Nabhinal. Delhi was ruled by the Mughal emperor Jahangir in the late 16th century. In 1594, Yusuf Khan was appointed the Subedar of Jaunpur, Then the Azamgarh used to come in the Jaunpur province. Abhiman Singh (Abhimanyu Singh), son of Rajput Chandrasen Singh near Fatehpur, was a soldier in Jahangir’s army. In those days, there was a lot of discontent in the eastern part of Jaunpur province. Jahangir entrusted this responsibility to Abhimanyu Singh. After looking there, Abhimanyu Singh ended the rebellion not once or thrice. Pleased with this task, Jahangir handed over 1500 Parganas and 92 Parganas of the eastern areas of Jaunpur State to Abhimanyu Singh with Rs. 92.5000 rupees.

Raja Harivansh Singh: It was Raja Harivansh Singh who built a 36-door mausoleum in memory of his uncle Daulat Ibrahim Khan, which is still located in the town of Mehandar. This mausoleum is a sample of the marvelous artwork of its erstwhile architecture and architecture. Later Haribansh Singh accepted the religion of Islam. Due to Raja Harivansh Singh’s conversion to Islam, his wife Rani Jyoti Kunwar Singh took away her younger son Raja Vikramjit Singh. Today we all know the place as raani saray where she came to live. In later days, Rani’s son Raja Vikramjit Singh also got married to a Muslim girl and accepted the religion of Islam. His two sons Azam Khan and Ajmat Khan took over the reins of the state.

How Azamgarh was named: Azamgarh district is named after its headquarters Azamgarh. King Vikramjit Pargana was of the Gautama Rajput clan of Mehnagar in Nizamabad who later converted to Islam. He married a Muslim woman from whom he received 2 sons Azam and Azmat, Nawab Azamshah, son of King Vikramjit, established Azamgarh in 1665 AD in place of an ancient village called Phulwaria during the reign of Shah Jahan. This place was named Azamgarh after his name. Azam Khan founded this city from the ruins of Ailwal and Phulwaria.

Nawab Azamshah: Azam settled the city of Azamgarh with his own name and gave the fort its name. Azam Khan also built a fort on the banks of the Tamsa River on the east side of the city.

Azmat Shah: Ajmat Shah settled Ajmatgarh which falls in Sagadi Tehsil near Jeenpur market. Azmat built the fort and settled the bazaar of Azamgarh in Pargana Sagri. After Chabil Ram’s attack in 1688 Azmat Khan fled north with his troops attempting to cross the Ghaghra at Azmat Shah Gorakhpur but the people of Chilupar (Barhalganj) resisted his arrival and Azmat Shah was Shoot in the stream or drowned in an attempt to escape. Azam Shah died in Kannauj in 1675 AD. The descendants of Azmat became the kings of this region. Ikram, the son of Azmat, looked after the governance. His younger brother’s name was Mohabbat Later only Mohabbat’s son Iradat was left from this family, who took over the zamindari.

Mohabbat Khan’s rule in Azamgarh: In the early eighteenth century, Azamgarh remained under the governments of Jaunpur and Ghazipur. At that time the king of Azamgarh was Mohabbat Shah. The prosperity of Azamgarh was at its peak in his time. Azamgarh district was formed on September 18, 1832. After the conflict of 1957-58, no major incident took place in the district except Gorakshini or the anti-cow slaughter movement of 1893 till the end of the 19th century.

Creation of Azamgarh: On 15 November 1994, “Azamgarh Circle” was created as the fourteenth division. Azamgarh district has eight tehsils. Which are Lalganj, Sadar, Sagdi, Mehnagar, Budhanpur, Nizambad, Martingganj and Phulpur. The largest tehsil is Nizambad. Azamgarh has 22 blocks. 10 Vidhan Sabha, it is 2 Lok Sabha seats, 2 Municipal Councils and 11 Nagar Panchayats as well.

Azamgarh’s contribution to the independence revolution of 1857: Azamgarh has a special importance even during the freedom movement. The city also played an important role in the first battle of independence in 1857. After India became independent, around 472 ‘Azamgarhis’ were honored in 1973 with the Copper Medal awarded to them or their family members for their contribution to the freedom struggle. On October 3, 1929, Mahatma Gandhi visited Azamgarh and a meeting was held at Sri Krishna Pathshala which was attended by about 75000 people and Rs 5000 was presented to Gandhi ji.

Situation of Azamgarh District: Azamgarh is situated on the banks of Tamsa River and south of Ghaghra River. The administrative headquarters of Azamgarh is on the Lucknow-Ballia State Highway, 269 km from the capital Lucknow. Azamgarh district located in Purvanchal in Uttar Pradesh as well as a mandal, which consists of three districts Azamgarh, Mau and Ballia. The name of Azamgarh is not unknown in the country and abroad. Geographically, Azamgarh is located in the eastern part of Uttar Pradesh. Azamgarh district is surrounded by Mau district in the east, Gorakhpur in the north, Ghazipur in the south-east, Jaunpur in the south-west, Sultanpur in the west and Ambedkar Nagar in the north-west. Geographically, the position of Azamgarh is 26 ° 04′N 83 ° 11′E / 26.06, 83.19. Is on The average elevation here is 64 meters (209 ft).

Literature and Culture of Azamgarh Introduction: The city of Azamgarh has been famous for its literature, culture and education from the very beginning. Azamgarh has the distinction of being the birthplace of great men like Rahul Sankrityayan, Ayodhyasinh Upadhyay ‘Hariyodh’, Maulana Shibli Nomani and Kaifi Azmi. Even today, from here, many politicians, administrators, academicians, litterateurs, artists, businessmen, players are seen playing their names in the country and the world. This is the contribution of Uttar Pradesh Chief Minister Ram Naresh Yadav, and all the famous politicians like Chandrajeet Yadav, Amar Singh are also born here. Famous Hindi actress and social activist Shabana Azmi has an old relationship from here. Maharishi Durvasa, Dattatreya, Valmiki, Mahapandit Rahul Sankrityayan, Ayodhya Singh Upadhyay ‘Hariodh’, educationists Allama Shibli Nomani, Kaifi Azmi and Shyamnarayan Pandey etc. have been related to Azamgarh.

Azamgarh Religious Activity and Festivals: The traditional languages ​​of the district are Bhojpuri language and Purvi. The main deities worshiped by the people are the nine forms of Lord Brahma, Lord Vishnu, Lord Shiva, Goddess Lakshmi, Lord Rama, Lord Hanuman, Lord Ganesha and Goddess Durga. The practice of taking a holy dip in the river is also famous. The important festivals celebrated by the people of Nizamgarh are Nav Durga, Ramnavami, Krishna Janmashtami, Shivaratri, Diwali, Dussehra and Holi. Most of the Muslims in the district belong to the Sunni sect. They are mostly weavers. Sikhs, Christians, Buddhists and Jains are found in very small numbers in the district.

Tamsa (Tons) River Azamgarh: The cultural, mythological and historical significance of the Tamsa River is no less. This was the ashram of Adi poet Maharishi Valmiki on the holy bank, where the Adikavya Ramayana was created. In this ashram, Jagat janani maa Sita cut forest exile and Luv-Kush was born. There is also an ashram of Lord Dattatreya on the banks of the same place where Tamsa meets his younger sister Kunwar river while Durvasa’s ashram is at the confluence of Tamsa and Majhui. It is a sacred and important river in the Ramayana period. Goswami Tulsidas has mentioned it many times in the Ayodhya scandal. In order to celebrate Ram Vangaman and Bharata, Tulsidas ji has told its importance.

What is the place to see in Azamgarh?