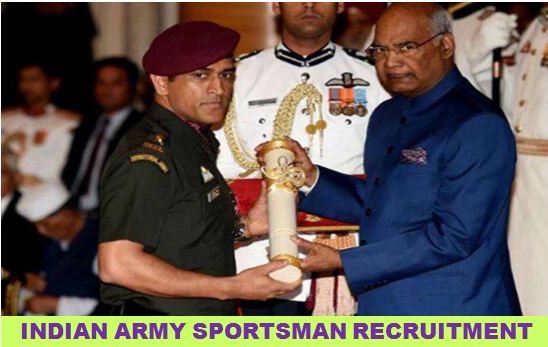 Indian Army Sportsmen Selection Procedure:-Indian Army today is not just about defending the country and being deployed at the border. The Army’s role today has expanded to R&D, Construction, Survey and more importantly – churning elite athletes for the country. India has given many eminent sports personalities so far – from Milkha Singh to Jitu Rai. The army men has proved themselves in the recently held Commonwealth Games 2018 at Gold Coast.In order to promote this enthusiasm among players and for sports, Indian Government has implemented sports quotas in education and government jobs.

Level of Sports II:- Sportsmen who have represented their District at State level and University team or regional team at district level and have earned 1st/2nd position will be eligible for physical relaxation and bonus marks in Common Entrance Examination ( if passed subsequently) as per laid down policies on the subject.

Candidates may apply within last two years, Sports certificates should be with registration number and from govt recognised sports institutes / bodies as under :-

Award of Bonus Marks NCC Candidates Sportsmen for All Trade/Category

Educational Qualification:- Aspirant in order to qualify for the rank of Naib Subedar and Havildar 10th passed form any education board is mandatory and there shall be no relaxation or exception that will be made is the candidate does not have the requisites.

Age Limit:- The age is the most basic and initial factor that determines the eligibility of the candidates, and as per the age limit is concerned the age of the individuals must be between the minimum and maximum age limit that has been set as per the rank mentioned below.

1)- Sportsmen candidates who have represented India at International level and State at National level within the last two years. For list of sports under which, relaxation in physical standards is admissible.

2)- Sportsmen who have represented District at State level and University Team or Regional Team at District level with 1st/ 2nd position within last two years. Sports certificate should be with registration number and from government recognized sports institutes/bodies as under :-

Documents Verification:- Since the recruitment of individuals for the sportsman quota is generally held as an open rally Bharti where at the beginning the candidates will be screened based on their documents.

Sports Trial:- The trial of the candidates is the most important stage where the candidates will be selected based on their level of quality as sportsmanship through their performance.

Written Exam (CEE):-The final stage of the selection procedure will be the written exam or also regarded as the common entrance exam which will be conducted for the final selection of the candidates. The written exam will be based on that syllabus and sections that have been selected by the recruiting organization and the exam will be conducted according to the exam that has been set up by the recruiting organization.

Important Notice:– Recruitment is a free service. Army recruitment cannot be influenced by any touts or outsider. Don’t give money to touts and do not get involved with them. Any involvement with touts will render your candidature null and void. In case any staff member of ARO or any body else from the Army asking for any monetary gratification should be immediately brought to the notice of the authorities.